Poland is a state of mind 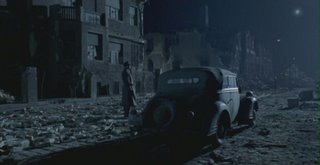 The image from the Pianist that is etched forever in my mind: that of a devastated Warsaw, lifeless and weary, the flow of revolutionary blood long run dry, and the low moon gazing helplessly upon the ruins. Chopin would have wept in his grave.

From this land we barely recognise as Poland, flourished great musical and artistic geniuses: Chopin, Konrad (Joseph), Kieslowski, Polanski, eminent figures who transcended their respective fields, and their tortured motherland.

"Maybe there's something about those brutal winters on the high northern plains of Eastern Europe, stuck defenceless between Berlin and Moscow, the peasant huts and concrete arpartments smelling of dank clothes, boiled cabbage and lost hope....
Kapuscinski used his Polishness as a lens to look at the rest of the world...and translated its effect on the soul to the the Third Wrold Nations he wrote about, and thus is both the source and product of his insight."

And the ballade is my take on what it's like to peer through this elusive Polish lens.
http://www.pianostreet.com/smf/index.php?action=dlattach;topic=23126.0;id=2685
Posted by Required field left blank at 1:15 PM No comments: