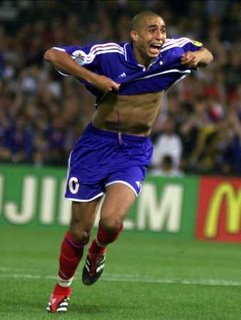 My Winning Eleven buddy, with whom I have spent the better part of my life hunched over the console box, have often dispensed advice as we prepare ourselves for yet another England-France friendly. "No way I'll put Trezeguet as a striker. Put Saha lar!" As advices go, they often fall on deaf ears.

Try as I might vehemently deny, I'm actually quite a sentimentalist, and a pretty disturbing one at that. I could just see myself as a really bad manager, and an even worse referee. What? Drop McManaman from my first-team, even if I'm painfully aware of his inability to pass, dribble or shoot. What? Award Manchester United a penalty? With abundant goodwill, I'll most probably just wave any appeals away, with a yellow-card for diving if he happens to call himself "Ruud".

So there, Trezeguet happens to be a player I kinda admire. I have known him since the days of ....Championship Manager 2, when he and Thierry Henry were bosom buddies under Wenger at Monaco. Wenger and a few other coaches (including virtual ones like me) were raving about the two French fledgings. Nobody really listened, even after Trezeguet banged in a 30 yard stunner to knock Manchester United out of a Champions League quarter-final, back in 1997. The seeds of my admiration for him was sown.

His golden moment came, not in World Cup 98, but 2 years later in the classic final against Italy, when he became an overnight star by scoring the golden goal which clinched Euro 2000 for France, baring his emanciated frame in the process. It was an image that burnt forever upon the memories of all who watched that match, whether they liked it or not. Ah! Those were heady days indeed when France ruled the soccer world with a Napoleonic fist.

Since then, he's established himself as a top striker for Juventus, the closest thing to a fox-in-the-box in the modern game, though he never really endeared himself to the Turin faithful the way Platini or del Piero did. But that's just because he's too quiet, too selfless and too thin.

Saha, on the other hand, did not possess such a polished pedigree. Not born in Argentina like Trezeguet was, he plied his trade in unfashionable Fulham, before compounding the problem by committing the cardinal sin of joining the Red Devils. Somehow, I am never truly excited by his blistering pace and deadly finishing, which he demonstrates on a weekly basis for Alex Ferguson. Therein lies the whole problem, I'm utterly biased when it comes to Manchester United.

Raymond Domenach, though, has put one ahead of me. Henry and Saha have been named in attack against Denmark in a warm up friendly. Putting aside my tribal rivalries and my feeling sorry for Trezeguet, I shall wish them both the best tonight.

The goal that brings me tears of happiness
Posted by Required field left blank at 10:26 PM 2 comments:

It's a French thing

If you, like me, get high from reading bad news, you should seriously consider supporting France. Now, those England fans would be up in arms to contest what they believe is their sole ownership over the domain of bad luck, what with unfortunate injuries at the most inopportune moments on the most important players. "Metartasal" has catapulted itself onto the English consciousness in recent times, even the grannies there can give you a verbal diagnosis if you are ever in need of one.

No, I don't mean bad news that boil down to strange quirks of nature or fate, rather, those that you take a gun and shoot yourself in the foot, or the metarsasal as an Englishman would be quick to point out, and you go, "fuck.....that HURTS!"

So every morning, I eagerly turn my copy of The Straits Times over its side, bypassing the truly depressing "Thousands perish in quake" and going straight for the jugular. "Thousands boo France team". Just a few days ago, Coupet walking out on France team made mini headlines in my local newspapers and brought a wry smile to my face. But booing your own team for no particular reason just about ranks up there in the "shooting yourself in the foot" category.

'You would never see that in England,' said Henry. 'Even when we're losing at Highbury, the fans keep cheering and supporting us. Fabien received a yellow card at one stage and you had the impression that it made the fans happy.'

Liverpool forward Djibril Cisse was also surprised by the hostile reaction from the fans.
'I can't believe it', he said. 'In England such a thing would be unthinkable. Maybe it's just a cultural thing but it is a problem.'

So there you have it. It's a cultural thing, some sort of national pasttime. It's some innate French need to be, to borrow from Hokkien colloquial, "sibei kwailan", a trait which filled our history textbooks with unapologetic revolutions and our soccer annals with unforgettable anecdotes. Just ask the Crystal Palace fan who was famously kung-fu kicked into notoriety.

Trawling the Net for more updated France news, I was not disappointed with the day's offerings:
"Cisse unwanted at Liverpool"
"Trezeguet may play in Seria B"
"Giuly swears never to play for France"

Maybe its about time to call it a day. C'est la vie.
Posted by Required field left blank at 9:21 PM 1 comment:

The die is cast. Raymond Domenach has selected his 23 men tasked to lead France to glory once again. But his whirlwind decisions left a lot of fans in its wake grieving at his list, which was bizzare to say the least. My heartfelt condolences goes out to Ludovic Giuly, and to lesser extent, Pires and Coupet, whose place in the France setup was revealed to him in one ego-crumbling "Barthez shall (forever) be my No 1" phrase.

What? Barthez the Botak? Bathez the spitter? Barthez the clown? Whatever incarnation this Barthez fella comes in, he does not inspire fear or command respect. The highlight of his Manchester career was marked not by goalkeeping heroics but by one particular incident where he valiantly tried to con di Canio to stop playing football just as he was about to score, hoping that the wily Italian would take to his tricks. Well, as the story goes, Manchester went out 1-0 to West Ham, and his place in the goalkeeping gaffes is assured.

What irks me though, is that Barthez was banned for 6 months this season for spitting at a referee whose decisions he did not take particularly well to. So, 6 months of idly his time away as Marseille struggled, while Coupet toiled hard in a Lyon team which was going places both domestically and European wide. Coupet deservedly picked up the French goalkeeper of the year award, but that, somehow, wasn't good enough. Domenach insists that he prizes experience over competency, but how does he explain away his decision to pick Chimbonda and Franck Ribery, 2 uncapped French players? He didn't. He muttered something about the planets and stars on the day the names were released and strutted off-stage, without fielding a single question from the reporters. Glenn Hoddle would have been proud.

And what about Giuly, Pires, Mexes, Anelka, Dacourt, Zebina, Malbranque and half dozen other French names plying their silky trades across Europe? Instead, we have Jean-Alain Boumsong, someone whose Mum would be proud of if he can find his way home everyday, and Alou Diarra, a Liverpool and Bayern reject. How many more rejects do you need to claim to earn the enthusiastic approval of Domenach?

Only recently, Coupet, unable to tolerate the clowning Barthez and the delightfully unreasonable Domenach any longer, almost walked out of a team-building session up in the Alps. Suddenly, the Les Bleus are living up to their names too literally.

It would be good if these woes consigned themselves off-field. Unfortunately, France have never acquired the art of free scoring. When they had the likes of Dugarry and Guivar'ch, strikers who can't score in a Thai massage parlour ( phrase coined specially for Crouch though) it was understandable, but the problem becomes more perplex with the likes of Henry and Trezeguet leading the front line.

People have questioned just how someone can dazzle like only true-blue legends do on a Saturday, then play like Boumsong WITH Boumsong on a midweek, then turn on his va-va-vroom again on a Saturday. With his usual nonchalance, Henry waves that away with his usual sage-like demeanour, "I'm not a machine, you know." Fair enough. His achievements at Arsenal have rendered him virtually untouchable. Referees think twice before yellow-carding him, and mere mortals struggle to breathe in his divine presence.

(For Thierry's sake, Henry's French, not English, despite his blessings to England, and his name is pronounced ON-RI, not HON-RI, or HEN-RI, or ON-NE-RI or any other permutations you can come up with. I will not hesitate to stop you in your tracks and correct you on the spot.)

Lastly, woe betide Zizou the saviour designate, who, at the ripe old age of 34, besides worrying about receding hairlines and impudent kids, has to somehow find a way to inspire his jaded bunch to the Jules Rimet. Things do not bode well when a nation places so much expectation on the square shoulders of any being, man or god. Just yesterday, France managed to overcome Mexico at their favourite stadium 1-0, courtesy of Florent Malouda. But there was another compelling statistic which releases a sense of foreboding to any France fan out there: Zidane gave the ball away 7 times, and was so awful he had to be substituted by Vikash Dhorasoo after half-time.

Facing a tigerish South Korea, a youthful Swiss and an athletic Togo team, is another first-round exit on the cards for the moribund French?
Posted by Required field left blank at 4:49 PM 2 comments: